I’ve decided that I’m going to do a Freedom Squad novel for Nanowrimo. I’m still working out the details, but it got me thinking about superheroes and my current favorite superhero tv show, The Flash, on CW.

Long ago, I discovered that I was apocalyptically slow when it came to running. As a kid, being one of the slowest was pretty terrible for playing tag or well, just about anything. So, when I first learned about the Flash while watching Superfriends, I thought, “So he can run…is that a real superpower? What if someone trips him?”

Little did I know that he was going to be one of my all-time favorites. So, here’s the evolution of my opinion of the Flash.

1. The Beginning – Superman vs. The Flash 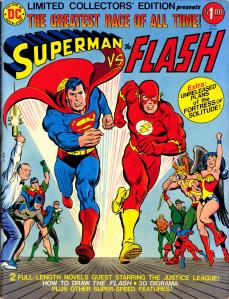 My First Comic Featuring the Flash

I don’t remember exactly when, but I got a giant-sized comic book featuring Superman racing the Flash. I already liked Superman, and I didn’t care much about the Flash. As I read the book, that changed. There were a couple of stories in the book, and the Flash and Superman both helped each other even as they raced to save Metropolis and Central City. Of course, they managed to outwit the villains. My only disappointment was that they didn’t really resolve who was faster.

Nonetheless, I got to see Flash’s thoughts about his supporting cast and Central City and I found myself pulling for the guy who could only run fast when he was pitted against the most powerful superhero of all.

For what it’s worth, it was a really fun to have a giant-sized comic book too. My copy has long ago collapsed.

Hmmm… I may need to visit eBay.

In any event, after this, I decided the Flash deserved my respect.  I liked him as much as any member of the Justice League of America.He did have a great Rogues Gallery – Captain Cold, Mirror Master, Gorilla Grodd, Professor Zoom, etc. I picked up an issue of his comic book, but it was a little weird. Besides, I was more of a Marvel kid. So, there it was… the Flash was a decent superhero.

2. The Crisis – The Death of the Flash

The Death of Barry Allen

I feel strange about this, but my opinion of the Flash didn’t really change again until he died.

DC Comics underwent a major transformation with a comic book crossover event called “Crisis on Infinite Earths”, which in my opinion is still one of the most impressive things to ever happen in the world of comics. At the time, the adventures of the Justice League of America took place on Earth-1, while the Golden Age heroes of the Justice Society of America lived on Earth-2, a parallel dimension. There were a plethora of other dimensions as well.

The most interesting part of this is that the Flash really started this crisis when the Golden Age Flash, Jay Garrick, appeared in an issue of the Silver Age Flash’s (Barry Allen) comic book. While there were lots of good stories set on Earth-1 and Earth-2 over the years, including a traditional Justice Society of America/Justice League of America event every summer, the multiple dimensions had led to lots of confusion in the DCU. Along came a powerful being from the anti-matter universe, appropriately called the Anti-Monitor to destroy all of reality (or at least the matter universes).

The heroes of multiple earths fought the villains of their different worlds. It was a colossal, titanic event and worlds died. I won’t go into all the details, and I’d probably get a few wrong, but Barry Allen, the Flash of Earth-1 gets trapped in the anti-matter universe. The Anti-Monitor has commanded the warriors of Qward (the Anti-Matter Universe) to slavishly build an Anti-Matter Cannon which will destroy the remaining Earths. There are no heroes to stop him…except the Flash.

Barry Allen breaks free and grabs the Psycho-Pirate, a master of emotions and supervillain who betrayed his own world. He forces the Psycho-Pirate to make the warriors of Qward hate the Anti-Monitor. While they turn against the Anti-Monitor, the Flash heads to the anti-matter core of the cannon. By running faster than he ever has, he manages to destabilize the cannon. As he continues to push himself faster than he’s ever run, he realizes that the energy and matter that make up his body are falling apart and that he’s being torn apart through the time stream. He’s going to die. He thinks of all the people that he loves and the billions who are depending on him and he keeps running.

The Anti-Monitor’s plan is stopped and the worlds are saved. And the Flash dies.

I had read a lot of deaths in the comics, although in the 80’s, the death of a major character was still pretty rare. Barry Allen wasn’t killed by a supervillain – he knowingly sacrificed himself to save lives. No one saw him or celebrated him (though they would find out later). And no one came to save him.

It was incredibly heroic, and it completely changed my view of the Flash. That night, I made up a speedster for a roleplaying game called Champions, and suddenly, I thought super-speed was an awesome power. 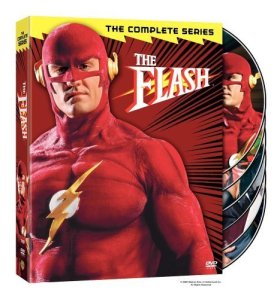 John Wesley Shipp is The Flash

In 1990, I was in college living with three roommates. Along with them and several other friends (including one who I married), we all played Champions, the pen and paper super roleplaying game and gathered together to watch The Flash tv show. And it was a great show.

We all absolutely loved it, even though CBS seemed to want to make it as hard as possible to find. It was interrupted by sporting events, moved days and times in the lineup and seemed to get bumped for every special under the sun.

Despite this, we kept finding it and watching it. The show did its best to show the Scarlet Speedster trying to deal with the limits of his power. We also all appreciated having STAR Labs involvement, adding a little more of the science to the story.

Unfortunately, the series vanished before we got to see most of the supervillains (Mark Hamill as the Trickster twice!), but it became part of my college experience. One of those friends firmly believes that if the series had been allowed to continue at a regular time (or existed in the days of DVRs), it would have been playing throughout the 90s.

Regardless, the series gave me Flash theme music, lots of good memories with friends, and it made me think even more about the Flash, which led me to start buying Flash comic books and introduce myself to the next generation of Flash, Wally West.

4. My name is Wally West and I’m the Fastest Man Alive 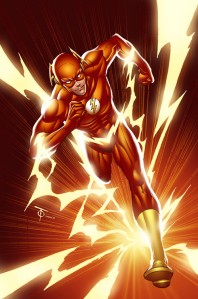 Back to the comic books – after the death of Barry Allen, Wally West aka Kid Flash, took up the mantle of his mentor. He had been a member of the Teen Titans, suffered through a terrible disease and well, had the convoluted sort of life that most superheroes had. I previously thought he was an okay character, but he came into his own as the Flash.

At first, Wally was slower than Barry and had to cope with not being as fast as his hero. He was also younger and had more of sense of humor. He became something of a little brother to the members of the Justice League. Eventually, he learned that he had been holding back on his own speed out of a sense of guilt. He didn’t want to go faster than Barry.

After this realization, he discovered that he could run faster than he had ever imagined and tapped into something called the Speed Force, a quantum dimensional… okay, I’m not sure, but I think it could have had to do with the inflation of the universe, but regardless, it was cool and the source of all super-speed. With the ability to tap into the Speed Force, Wally West truly was the fastest man alive.

Lots of fun physics discussions came out of the Speed Force, and Wally’s comics run took the Flash to places he had never gone before. If anyone reading this watched the cartoon Justice League or Justice League Unlimited, the Flash in that series was Wally West. There was one episode in particular where Lex Luthor combined with Brainiac has defeated the entire Justice League and the only one left to face him is Wally.

And that’s where the Flash runs fast enough to dismantle Lex’s armor piece by piece. Here’s a link if you’d link to see Flash and the Speed Force in action.

Watching Wally mature in the comics meant a lot to me, and a number of things that happened to him seemed to correlate with events of my adult life. Eventually, he was replaced as the Flash by Barry Allen once again, although he’s supposed to come back as a new version of the character in the comics.

5. Grant Gustin is The Flash

Here’s the part that I’m sure some readers have been waiting for. The CW has a new show, The Flash, which I suspect the entire superhero-loving world knows by now. With a nod to the previous show, John Wesley Shipp stars as Henry Allen, Barry Allen’s father. Grant’s character reminds me of Wally, is definitely Barry Allen, and pays homage to the earlier versions of the character. What I like most about him is that in an age of dark brooding vigilantes (some of whom I rather like), he’s a good man doing his best. He’s not a murderer. He saves people in every episode that I’ve seen. So far, it’s been the best superhero show on television in my opinion.

I like STAR Labs and the nod to physics. I like Grant and his supporting cast. I love the way the show has been written.

So, on those thoughts, here’s hoping that Grant Gustin and everyone else on The Flash have a long run. 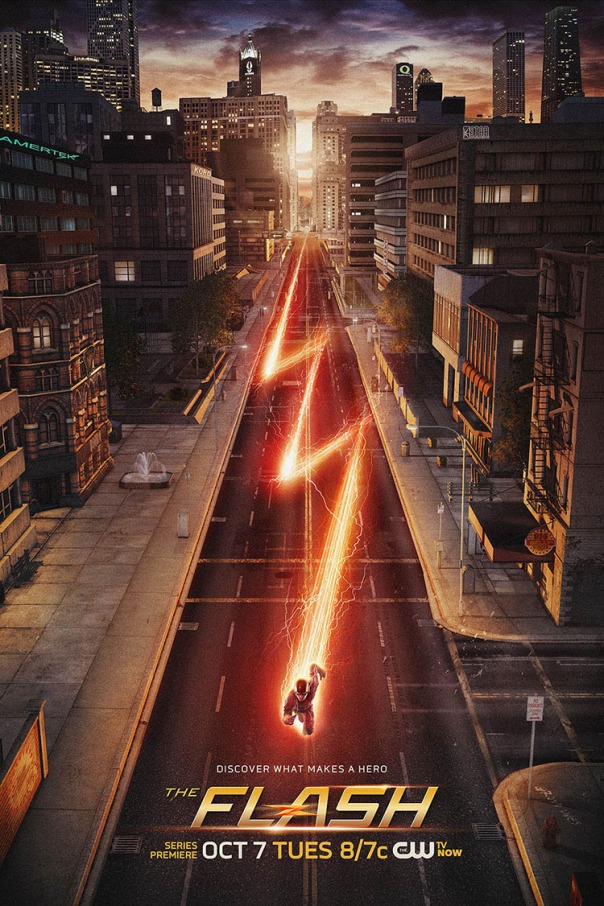