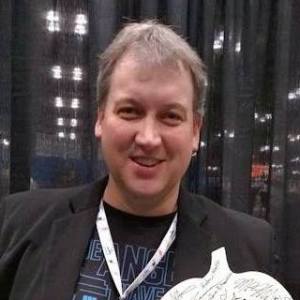 Harry Heckel has written role-playing games and fiction for over two decades. His latest work is The Darkest Lord from Harper Voyager Impulse as part of the writing team of Jack Heckel, in which Avery Stewart careens to his final confrontation with the forces of Mysterium University. Jack Heckel’s second series, following the Charming Tales, A Fairy-tale Ending and The Pitchfork of Destiny. Harry has also written Space Wolf novels for Black Library with Jeff Smith, under the name Lee Lightner.

He has multiple role-playing game credits for White Wolf Game Studio as well as the Star Wars roleplaying game from West End Games and Star Trek from Last Unicorn Games. His latest roleplaying book is Sothis Ascends for Mummy: The Curse and he has done game fiction for CMON, notably for Arcadia Quest: Inferno and Arcadia Quest: Pets.

He tries to write while balancing the obligations of his day job. You can find him at both www.harryheckel.com and www.jackheckel.com. Every November, he religiously participates in Nanowrimo (National Novel Writing Month). He lives in Mechanicsville, Virginia with his wife, daughter and two cats.

If you’d like to get in touch with him, fill out the form below or leave a comment on one of the blog posts. Thanks!