The Dark Lord (Book 1 of The Mysterium) 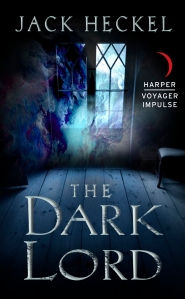 In this parody of epic fantasy, a young man travels into a dark and magical world, where dwarves, elves, and sorcerers dwell, to restore the balance between good and evil.

After spending years as an undercover, evil wizard in the enchanted world of Trelari, Avery hangs up the cloak he wore as the Dark Lord and returns to his studies at Mysterium University.

On the day of his homecoming, Avery drunkenly confides in a beautiful stranger, telling her everything about his travels. When Avery awakens, hungover and confused, he discovers that his worst nightmare has come true: the mysterious girl has gone to Trelari to rule as a Dark Queen.

Avery must travel back to the bewitched land and liberate the magical creatures . . . but in order to do so, he has to join forces with the very people who fought him as the Dark Lord.

The Pitchfork of Destiny (Book 2 of the Charming Tales)

Life in the Kingdom of Royaume has been happily ever for King William Pickett and his fiancée, Lady Rapunzel. But when Volthraxus, the Great Dragon of the North, returns looking for the love of his life, the Great Wyrm of the South, it becomes clear that some fairy tales never end.

After Volthraxus discovers his love was slain by the newly crowned king, he seeks his revenge by kidnapping Rapunzel. Once again, Will teams up with Edward Charming, the only man in all the kingdom with the skill, ego, and dashing good looks to fight a dragon. Our heroes’ fates depend on finding a weapon re-forged in dragon blood—the Pitchfork of Destiny.

But as the two set off after the dragon, Charming’s bride, Lady Elizabeth, falls into the clutches of a mysterious sorcerer known as the Dracomancer, who has his own plans for Royaume.

A Fairy-tale Ending (Book 1 of the Charming Tales)

Collected for the first time, A Fairy-tale Ending is comprised of two volumes of Jack Heckel’s Charming Tales: Once Upon a Rhyme and Happily Never After.

Prince Charming had one destiny: to slay the dragon and save the princess. Both have been achieved, except there’s a problem: Charming had nothing to do with either. A farmer named Will Pickett succeeded where royalty had failed—and this simply will not stand.

Thus begins an epic adventure that has Prince Charming and Will Pickett vying with each other for the throne by challenging trolls, outwitting scoundrels, and facing all manner of fairy-tale creatures. All the while a dark sorcery envelops Castle White, and Will’s sister Liz and her friend Lady Rapunzel uncover a threat to the kingdom. The fate of Royaume hangs in the balance as Charming tries to salvage his reputation, and the clock is ticking…

Happily Never After (Volume 2 of the Charming Tales)

Once upon, once again …

The dragon has been slain, but the problems have just begun for Prince Charming.

Disowned by his father, the King, and abandoned by his only friend, William Pickett, Charming must find a new path in life—but he’s going to need a lot of help. His love, Liz, barely survived an assassination attempt; his former fling, Rapunzel, is in danger; and William is under an evil spell cast by Princess Gwendolyn.

The fate of Castle White hangs in the balance as Charming tries to find himself, while finding new allies along the way—including an odd number of dwarfs (or is it dwarves?) and a reformed beast. But he’s running out of time to stop royally ruinous wedding bells from ringing …

Click the picture above for the Amazon Kindle version or click here for Barnes & Noble’s NOOK version. The iTunes version is here and it’s available on Harper Collins’ website here. Thank you!

Once Upon a Rhyme (Volume 1 of the Charming Tales)

Once Upon a Rhyme is the first book in The Charming Tales!

The dragon is dead. The princess has been saved. There is but one problem: Prince Charming had nothing to do with it.

In order to save his royal reputation, Prince Charming must begrudgingly enlist the help of accidental hero William Pickett. The two set out on an adventure that has them fighting trolls, outwitting a scoundrel, and drinking the foulest ale ever, collecting bruises to both body and pride along the way. Meanwhile, the rescued princess, Gwendolyn, turns out to be one dangerously distressed damsel, and an evil presence takes over Castle White in Charming’s absence …

Enter this rollicking world and discover just what happens when a fairytale leaves the well-trodden path of “once upon a time.”

Click the picture above for the Amazon Kindle version or click here for Barnes & Noble’s NOOK version. The iTunes version is here and it’s available on Harper Collins’ website here. Thank you.

Souls of the Everwood (Book 1 of the Krueger Chronicles)

Once Krueger was a member of the Forest Guard – an archer in love with a Fae named Elianna. After losing his eye in battle, he was cast out. He began a new life with the Church where he was Chosen for Damnation – to serve the Church by exposing his soul to the worst of evils. After nine years, he leaves to make his way as a common soldier, but his company is sent back to the Everwood. When he meets Elianna again, he learns that nothing is what it seems…

Balefire and Brimstone (Book 2 of the Krueger Chronicles)

Several months after leaving Ostburg, Krueger feels compelled to aid an associate of Dr. Nicolai, the sorceress Jasmyne, as she heads to Nordstadt to retrieve a tome containing the secrets of demons. When Bishop Ignatius of Nordstadt decides both Jasmyne and the warrior woman Saren are his enemies, Krueger finds himself in a conflict that threatens to unleash an ancient power better left buried. Balefire and Brimstone is the second book in the Krueger Chronicles, following the events of Souls of the Everwood.

What happens when Chaos Marines encounter the wrong type of Space Wolves…an investigation with plenty of flashbacks as the Space Wolves investigate the fate of traitors to the Emperor. This story was the first Lee Lightner story and it was originally published in Inferno! magazine. Black Library has kept it in print in the iTunes store. Please head to the apple book store or Black Library if you’d like a copy. For Fenris, for Russ, for the Emperor!

Collecting the novels, Wolfblade by William King, and Sons of Fenris and Wolf’s Honour by Lee Lightner. This collection contans the fourth through sixth volume of the Space Wolf series, chronicling Ragnar Blackmane’s adventures as he rises to the rank of Wolf Lord. 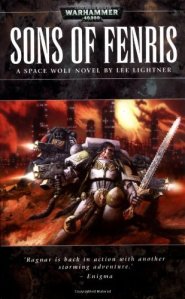 Ragnar Blackmane of the Wolf Blade is caught in the middle of a war on a planet far from Earth. For the young Space Wolf, battle is what he lives for, but this time he not only faces the forces of Chaos, but he has to deal with another chapter of Space Marines – his own chapter’s greatest rivals – The Dark Angels!

This book is the fifth in the Ragnar Blackmane series and is included in the Space Wolf Omnibus, Vol. 2 above.

After rejoining the Space Wolves proper following his experience in Sons of Fenris, Ragnar Blackmane has the opportunity to regain the Spear of Russ and reclaim his honour. Doing so, however, puts him face to face with a daemon of Tzeentch.

This is the sixth and final book in the Ragnar Blackmane series. It is collected in the Space Wolf Omnibus, Vol. 2.