“Don’t buy this book” and other writing updates

As I start to write this, I have 17 minutes left of the one year publication anniversary of Once Upon a Rhyme. With the possible exceptions of Umbra: The Velvet Shadow (my first major roleplaying book) and Sons of Fenris (my first published novel), nothing has had a larger impact on my writing life. Since that day, I’ve been a guest at the New York Comic Con, a guest at my local game and sci-fi/fantasy convention RavenCon, had a sequel published (Happily Never After) and written a third book, Pitchfork of Destiny. I’ve had other works at least be considered in the office of a major publisher, and it appears likely that I’ll have a new series start in 2016. 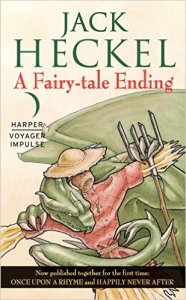 , Jack Heckel has another book – A Fairy-tale Ending! And that’s the one that I want to warn everyone about. If you own Once Upon a Rhyme and Happily Never After, please DON’T buy that book! It is a collection of those two books together in one place, and hopefully in a month or two, it will be released in paperback. I just don’t want anyone getting confused and thinking that it’s the third in the series. That will be Pitchfork of Destiny coming in December.

However, if you know someone who hasn’t read the series, please recommend A Fairy-tale Ending, because it contains both books, and a cool map along with some additional editing. If they haven’t started the series, it’s a good way to be caught up on everything. I guarantee that they will laugh.

I also want to thank everyone who has helped me over the years to keep writing. So many of you have inspired me and continue to do so. Thank you. END_OF_DOCUMENT_TOKEN_TO_BE_REPLACED 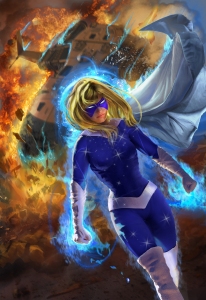 I came to the realization earlier this week as I was reviewing my year’s writing goals that I needed to spend some time focusing on Rigel and Freedom Squad. Currently, there are over 200,000 words written on the character, spread across three novels and one novella. I’ve asked Harper Voyager about their interest in her and her team, but I’m still awaiting a reply.

I keep reading that this is the time of the female superhero. As Rigel was originally created nearly 27 years ago, I think she’s ready to burst onto the scene. She even has a fantastic piece of cover art ready to go.

Most importantly, she’s meant to be an inspiration to kids like my daughter. While she’s a legacy hero, she’s not a Supergirl or Batgirl, with the powers and and identity of another character. One of her story arcs is her effort to separate herself from the legacy of her father, Orion, and prove herself on her own, while continuing to uphold her father’s ideals.

I’m currently undergoing a rework of all of the Rigel novels, with some assistance from the capable Heather Curatola (the original creator of Rigel) and my Jack Heckel co-author, John Peck.

So while many of my good friends are at GenCon or the Richmond comic convention today, I thought I’d share the current rewrite of the prologue for Daughter of Orion (formerly In the Stars). Enjoy! END_OF_DOCUMENT_TOKEN_TO_BE_REPLACED