I’ve had my first superhero story published. I’m really excited, but before I get started, I want to thank Sam R. Kennedy for the tremendous cover that he created. If you’d like to see more of his work, you can click here to go to his website. He is a true professional and an absolute pleasure to work with. Additionally, I’ve invited my fellow contributors, Wayland Smith and Dara Hannon, to do guest posts about their novellas in the next few days.

So, this is your official warning that I’m potentially about to go into a fanboy crazed comic book rant. 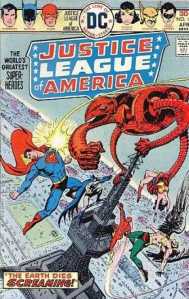 The first comic book that I ever remember getting was Justice League of America #129 (that’s the first series). I’m not sure that I understood everything that happened, but I was shocked when (spoiler alert!) Red Tornado was willing to sacrifice himself to save a city. There were so many superheroes (Superman, Wonder Woman, Batman, Hawkman, Flash, of course, Red Tornado) with so many powers that I was completely hooked. I followed that up with The Incredible Hulk #200 (seriously awesome!) and Captain America and the Falcon #199. I was hooked. Spider-Man would soon enter my life. To this day, I love superheroes and comics.

During National Novel Writing Month, I wrote a sequel to my novella/novel in progress, Freedom Squad: Daughter of Orion. I’m hoping in the next year to have a couple of books come out for Freedom Squad, written at a Y7 level or so. Rigel is officially my daughter’s favorite superhero (though she’s second to Hermione Granger as far as idols). While this book is set in the same shared universe, it’s written for a more adult audience. For example,  there’s a sex scene in one of the stories as well as a human trafficking issue in mine.

When I wrote Hidden Strengths, I wanted to write an origin story about people who were discovering their powers and trying to benefit from them without being a hero or a villain. I was inspired by Spider-Man and his attempts at pro wrestling before he learned that with great power comes great responsibility. Scott, one of the protagonists, decides to get involved with a superhuman fighting league so he can earn money to pay for college. He’s a nice guy with something to prove who gets in over his head rather rapidly. Fortunately for him, he has the ability to absorb kinetic energy making him stronger and more invulnerable in the short term. Part of that energy stays with him, permanently changing him over the long term.

My other protagonist, Marisa, is probably closer to being a villain at the beginning rather than a hero. She has control over her own superhuman powers and has trained to use them for most of her life. Unfortunately, outside of combat, she’s a pawn of the people around her.

Both characters discover something they need in the other. For Marisa, Scott is one of the first decent people she’s met, and she desperately needs someone like that in her life. For Scott, Marisa bolsters his self-confidence and helps him find the strength to try and escape the world of superpowered combat. Unfortunately for both of them, the true villains of the piece aren’t going to let them walk or even run away.

There’s a lot of action in the story and hopefully, a solid superheroic origin.

HeroNet Files Book 1, is available on Amazon in print and Kindle versions, as well as Smashwords in about every other electronic format. It’s also available at Barnes and Noble in print and Nook formats.