← I don’t believe you, Captain America
On the Painting Table – Valkeeri update →

I love the miniature hobby and play a number of board and wargames. Miniatures inspire me. I especially enjoy bringing them to life by painting them, and it so happens that we live in the Golden Age of Miniatures with lots to choose from.

There are a couple of companies, such as Games Workshop (thank you for letting me write Space Wolf novels!) and Privateer Press, who have fantastic games and are often found displayed in your FLGS (Friendly Local Gaming Store – I have three in my area).

There are also a number of companies that make wonderful miniatures, but are much smaller operations, sometimes a couple of partners with a garage for storage. They may be the sculptors of the figures or the writers of their own rulesets.

One of these companies is Hydra Miniatures. Unlike many gaming companies, I’ve never worked for or with them. To the best of my knowledge, we’ve never met and I doubt that they’ve read any of my books. I’m just a regular customer. Quoting from their website:

Our mission is to break away from these clichés and create never before seen figures that no one else is doing. Figures that fire your imagination and inspire you to new gaming possibilities.

Next – form, fit and finish. So many figures are a pain to assemble and paint. Our miniatures are designed with the gamer in mind. Castings are quick to assemble and appropriately detailed to make them easy to paint. You get your figures on the table quickly so you can spend more time gaming.

Finally, we believe that communication is essential. So we’ve set a very high standard of customer service for ourselves. We hope to avoid mistakes through good communication and high standards of quality. However, if we make a mistake, we pledge to correct it as soon as possible—no hassle, no fuss! And hopefully website features like downloadable catalogues with actual-sized photos will help gamers make informed decisions about our products and eliminate some of the typical errors other miniatures manufacturers have encountered.

In short, we’re going to be the absolute best at what we do. And your experience with Hydra Miniatures will keep you coming back for more.

I’ve visited the Hydra site for years, but it was reading this section of their website that made me decide to purchase. Partial credit goes to Star Trek Voyager as I had been thinking about Tom Parris as Captain Proton. Hydra has their own Retroverse, a ‘Buck Rogers’/’Flash Gordon’ inspired shared universe with two games, one a 28mm skirmish called Retro Raygun and a spaceship combat game called War Rocket. They also have a range called Primal Dawn, but I’m in a sci-fi mood.

The site was easy to navigate. The prices are clear and reasonable and their shipping policy was very fair. Basically, they charge shipping. No worries.

I ordered a handful of figures from the Retro Raygun range. From Alien Species, I selected a cool alien Aquaclops for $13.50, I got two of the Valkeeri figures – Princess Alluria and Valkeeri Leader A for $6.50 and $4.75 , from the Galacteers, I selected Ace McGuire for $4.75 and from Robot Legions, an impressive WarBot for $13.50. So, two big figures and three hero types for under $50 including shipping. Selecting these wasn’t easy, as I could have spent my entire budget on Galacteers, Robot Legion or Valkeeri alone. In the Alien Species group, I really wanted the Cosmic Stranger as well. He has two heads and looks like he’s giving a Vulcan greeting. They have a section for another group of aliens, the Zenithians, but I managed to resist for now.

With a small company, shipping can take some time. I wasn’t expecting anything for at least two weeks, knowing that orders may need to be processed around day job schedules, etc. Even some larger game companies aren’t known for fast turnaround. I was completely impressed when I came home and in  less than a week found this:

A nice padded envelope from Hydra waiting for me.

It had cool labels on the other side, but I don’t want to show the entire Internet my home address. Anyway, it was nothing fancy, but I wasn’t expecting anything fancy and I was totally impressed to receive my figures so soon. As far as customer service went, they delivered. Well done.

I ripped the envelope open rather swiftly. Before I go any further, I’ll note that they give you options to get premium packaging so you can display the figures in your store or give them as gifts. I chose to forego this as it makes the weight increase. They also had an area to make comments when I placed the order, so I mentioned that I was going to do a blog about the figures. 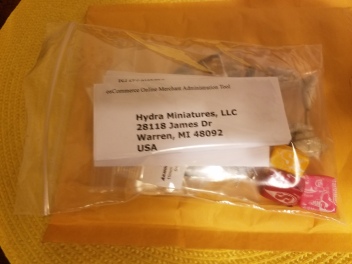 I opened the envelope and removed a bag. Immediately, I noted that it had a few extra things inside in the form of Starbursts. This was an excellent sign. All the figures were nicely sealed inside in their own plastic bags. I dumped everything out and let the unboxing begin. Please see below.

In the image you can see the part resin Aquaclops, the metal Warbot and the other figures all in their own bags. I received a detailed receipt and a very cool handwritten thank you. If you’ve ever ordered something and wanted to feel special, I recommend Hydra. And, there was an extra bag with figures from Atomic Tank, their newest game. 10mm scale ‘Armored Warfare in the Atomic Age’ and I had a pack of little Robot Legionnaires. They looked very cool and I haven’t put them together yet, but I was very impressed. Besides, with a name like (imagine dramatic announcer with reverb) Atomic Tank, how can that not be fun?

So, they said form, fit and finish. I decided to put them to the test and assemble the miniatures. First, the Aquaclops. He had minimal cleanup and looked amazing. Princess Alluria was a single piece figure. Literally, less than five minutes after opening the figures, I was looking at this:

Look at that cool raygun in Alluria’s hand, and great toe claws on the Aquaclops.

I worked on Valkeeri Leader – A and the Warbot next. The Valkeeri Leader had a cape and she might have had the most flash (extra metal from the mold) for me to worry about. However, I’d call it minimal. Her cape went on like a charm. The Warbot went together very quickly. I might have delayed things by making robot noises during assembly. 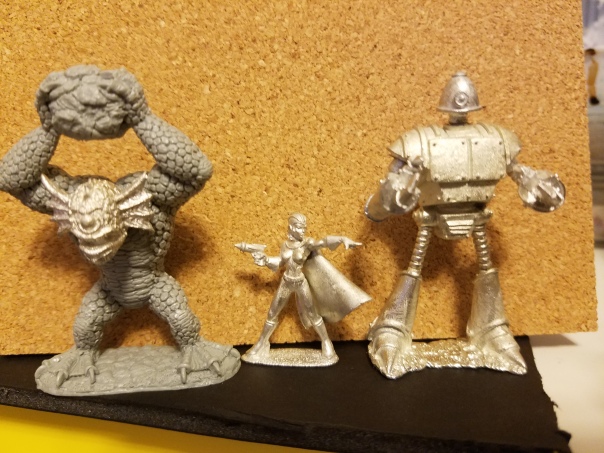 I kept the Aquaclops for scale. The Warbot and Valkeeri Leader looked great.

Finally, I had Ace McGuire. He took me the longest to assemble because I had to make a choice. He had three different arms to pick from, one with an extra raygun, one with a sword and one holding a helmet. I went with the helmet. In half an hour or so (plus or minus time I spent having the Aquaclops and the Warbot dramatically face off), I had this: 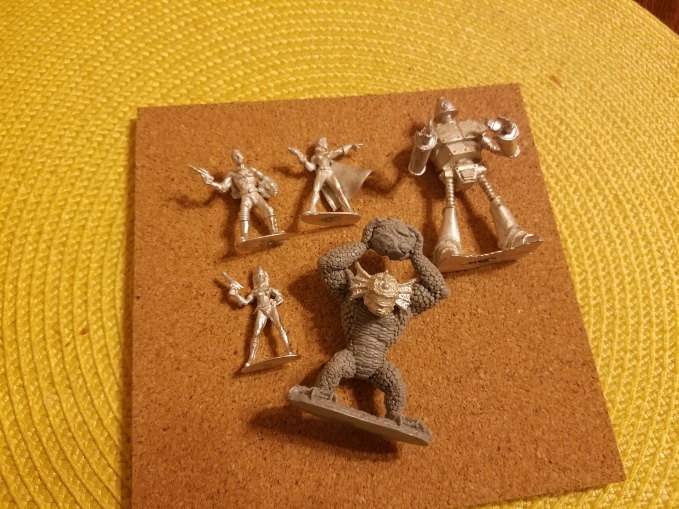 Half an hour to awesomeness. They all looked great. I was happy. I managed to prime them, but I ran into primer issues. It had nothing to do with the figures. I used a different black primer and it caused some issues and delayed my painting. However, I primed the Aquaclops in white. He’s not quite completed, but here’s what he looks like today:

In short, Hydra delivered on all fronts. I happily recommend their miniatures and their customer service. I didn’t even mention the Pina Colada starburst by name. I’m having fun, and they’ve fired my imagination as promised.

No one knows what’s out there among the stars, what discoveries await, or what terrifying threats might face the brave settlers of colony worlds. However, wherever danger in the galaxy may lurk, the Galacteers will be there! (Wait, is that Aquaclops holding a stone of deadly Lokium-13?)

← I don’t believe you, Captain America
On the Painting Table – Valkeeri update →