Besides writing, I love roleplaying, board games and miniatures. I use the games as inspiration for my writing as well as playsets for game designs.

For something different, I thought I’d share a few things currently on my painting table.

First, I recently received Zombicide: Black Plague from a kickstarter. The image shows a few of the heroes who are in progress. I really like Xuxa who is a Xena homage on the left. I need to get her face done. She’s amazing in the game. I have a number of others calling to me. 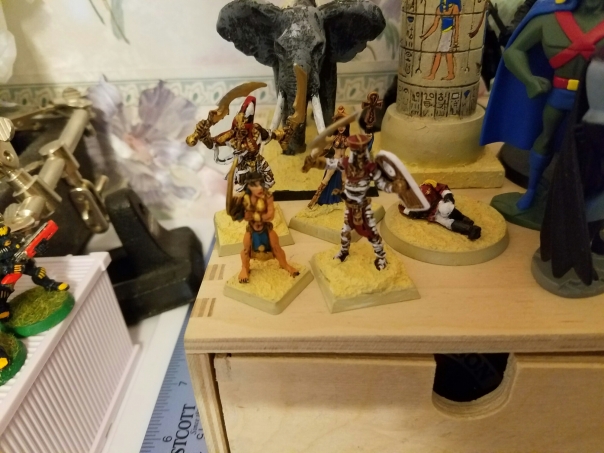 I’ve also been on a mythical Egypt theme for a while. I apologize for the blurry picture but that’s a Wargods of Aegyptus Asar heroine surrounded by some Reaper Bones mummies. You can see a British looking wounded Games Workshop wounded Praetorian with his legs sticking out behind a mummy and a Wargods elephant in the background.

There’s a better shot of the elephant in progress along with a Grendel Scotia resin column I painted. I’m very pleased with the column. However, I’m sure everyone’s distracted by the flowery wallpaper and the Martian Manhunter. Everything is better with J’onn J’onz.

Here’s a shot of part of a resin Temple of Horus dry brushed with yellow. I then brush a bleached bone color over the yellow and fill in with color. The end result usually comes out like the next picture. 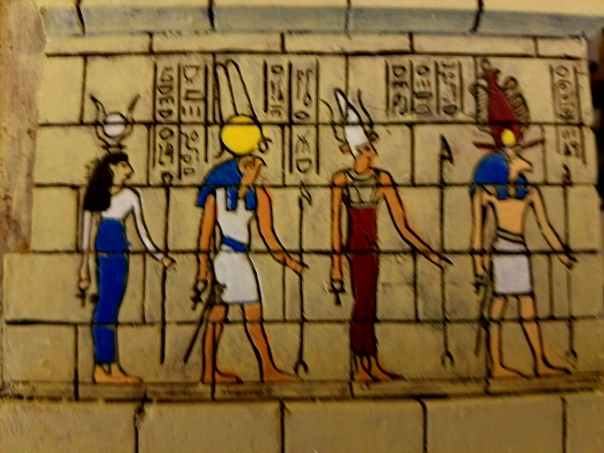 As I add colors, I build back to darker and brighter colors. Eventually, I hope to assemble the entire temple for gaming fun. 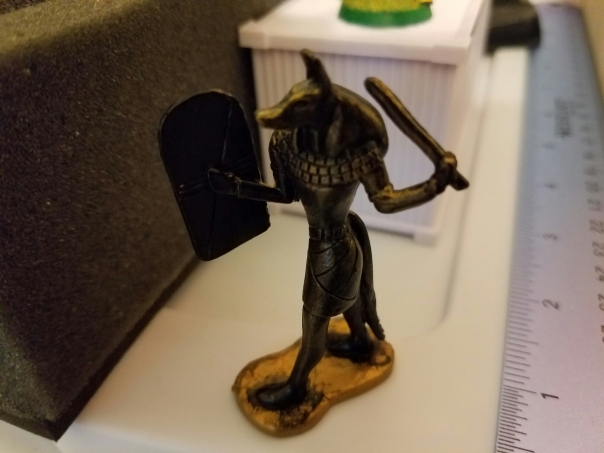 I also have some other pieces for the project that I’ve picked up. This guy is a toy from a Toob. I painted him black and lightly dry brushed. He’ll make a nice statue. 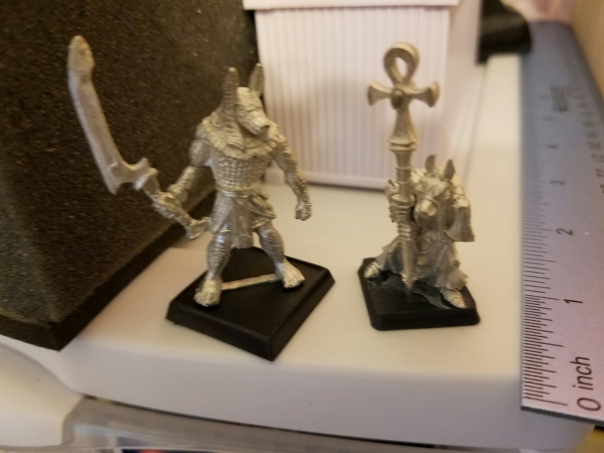 Here’s a Reaper figure next to a Wargods Anubi Embalmer. They both look like they are going to be good additions to mythic Egypt. Anubis should be pleased.

Finally, I have a Games Workshop Ophidian Gate from Age of Sigmar. I sense prehuman serpent folk out there.

Anyway, lots of fun stuff. I have a bunch more to do but I inspired myself for my writing project, Son of Helios, about a Greek hoplite caught in mythic Egypt. It has several millenia worth of anachronism but I’ve had fun writing it. Hopefully, I’ll have it released before the end of the year.

If anyone has questions about models, painting or any comments, please post them.

Posted on July 10, 2016, in Painting Table and tagged Age of Sigmar, Miniature Painting, Nefsokar, Son of Helios, Wargods of Aegyptus. Bookmark the permalink. Leave a comment.