It’s been over a month since I was in Atlanta for the CMON Expo 2015. I had a fantastic time indulging in my miniature gaming hobby and being a freelance writer. The event also came at a good time for me in regards to my day job, although I wish it hadn’t been going on during Father’s Day on that Sunday.

Here’s a link (CMON Expo pix) to some of the pictures from the event. I’m in a few of them, although sadly, I didn’t recognize myself at first. I’m in a bright blue/turquoise polo and my hair looks far more gray than I imagine it. I’m also a bit larger than I’d like, but I’m working on it. Eat well, exercise and take care of your health.

On to fun things… 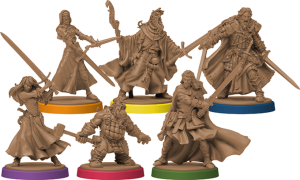 I had a fantastic time getting introduced to new games. I played Zombicide: Black Plague and unlocked my inner Legolas taking an elf character and shooting lots of zombies. I have really enjoyed all my Zombicide experiences though the game can take a while and the rules can be off-putting to new gamers. Still, all of us had lots of fun and it made a great story. The character I played is the one with the green base.

I also spent a great deal of time playing a game called The Grizzled. It was a card game about being French soldiers in World War I in the trenches. The game actually had nothing to do with combat, but it was all about friendship and survival. We had to work together to try and make it to peace before we ended up having a war memorial set up commemorating our deaths. Fighting against rain, snow and night and dealing with wounds that could render us mute, needing a rousing speech from whoever was in charge on a particular turn, and hoping that we could possibly enjoy a Merry Christmas in the middle of the suffering made it a lot of fun. For a game where everyone was trying to discard cards in their hands, I think everyone who played felt as if it was a tough but ultimately amusing game. I believe the game designers made it to honor their grandfathers or great-grandfathers, and they did very well.

The game that may have made the biggest impact on me was Arcadia Quest. It featured little Chibi models, which I normally don’t collect as they look strange with big heads and little bodies. However once I started playing, I had a great time. The game is a humorous attempt by guilds of heroes to retake the city of Arcadia from the vile vampire, Lord Fang. However, each guild wants the glory, so it’s a free-for-all battle against the other guilds and the monsters. The Chibi look was perfect for the game. The characters in the game world take themselves extremely seriously but reading about them is quite hilarious.

In other words, they reminded me of Prince Charming in Once Upon a Rhyme.

I went ahead and got the game to enjoy the mayhem and chaos. I’ve played a few games with my wife, daughter and a good friend, and we had a blast. I even went so far as to start painting a few of the figures. 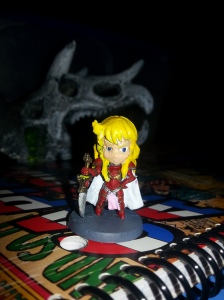 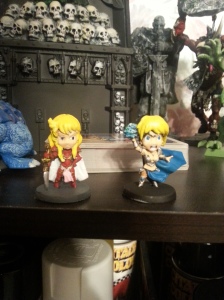 I may do some more work on both (and I’m not the best painter in the world), but here is Diva (the woman in red armor) and Maya (a yoga-practicing sorceress). Maya definitely needs some finishing, however I was surprised at how fun it was to do the faces and the eyes, which normally are a pain for my smaller headed figures.

In any event, I want to thank all the staff at CMON for what was a wonderful weekend especially my friend Robert. Perhaps one day, Will Pickett, the Scarlet Scoundrel, Elle or Prince Charming might end up as Arcadia Quest figures.

What would the world do?