Every so often, I have an experience where I read or see something and I wish that I had written it. Sometimes, the same piece speaks to me and echoes something deep in my soul. Since I’m a very moody emotional artist-type, I can get teary-eyed at all sorts of things. For example, I can’t make it through a production of Man of La Mancha or Les Miserables with a dry eye.

A couple of weekends ago, I had one of those experiences somewhere I never expected.

My daughter had been begging me to take her to a particular movie for about two months. I’ve been sick (and still haven’t been able to breathe easily in 2014), my grandfather is dying and my poor family is doing everything that they can to keep him comfortable at the expense of their sanity, I’ve been put in charge of testing the two largest IT initiatives in my company, the holidays hit, etc. Still, after much asking and lots of cold medicine I decided that I’d get her there last weekend for a matinee. The movie she wanted to see was Frozen.

I want to go see it again.

Now, it’s definitely a kid’s movie and I’m not going to say that everyone should rush out and see it instantly, but when it comes out on DVD or gets to streaming on Netflix, watch it. I really enjoyed it, and it made me think about how I write characters. I found myself thinking about the Lantern, Charming, and Freedom Squad. It’s a silly movie, it’s a fairy tale, parts of it are very predictable, but parts of it aren’t so predictable and some of it is downright fantastic. I went to my childhood and back again.

Without including any spoilers, by the very end, the movie had the best example of true love that I’ve ever seen. And there’s something that happens fairly early in the movie that also resonated with my high school self (picked-on geek).

It’s fun and enjoyable, and it was something I really needed to help get me back on track. For me, it was the best movie of 2013, even if I did see it in 2014. In a world of dark and varying shades of gray, it was nice to play in the snow. 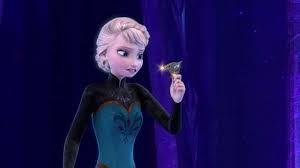 Posted on February 5, 2014, in Life and tagged Frozen. Bookmark the permalink. 1 Comment.