While I’m eagerly anticipating the ebook release of The Pitchfork of Destiny on Tuesday, I received some unfortunate news. The Virginia Voice fundraiser will not be taking place on April 10th. Several members of the Hanover Writers Group as well as some good people at Virginia Voice worked very hard on the event, but it wasn’t meant to be. I’d still encourage everyone to at least visit the Virginia Voice website (virginiavoice.org) and be aware of the good that the organization does.

As half of Jack Heckel, I’m working on the first book in our new series – The Dark Lord. We are hoping to do to epic fantasy what Charming and company are doing to fairytales. This doesn’t mean that The Charming Tales are coming to an end, only that we want to expand our horizons and try some other things. 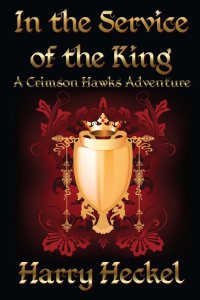 As Harry Heckel (yes, pen names get confusing), I have an update for the Crimson Hawks where In the Service of the King should be re-released as Crimson Hawks: King’s Contract (the current cover is to the left), a second Hawks book (finally!) will come out this summer and I hope Rigel will make her public debut in 2016. Right now, Jack Heckel is taking priority, but I’m sure several people want more of my solo books.

For everyone out there who reads this and asks, “What about The Lantern?”, I’m thinking I need to go on a writing retreat and take a week off to focus on my long-awaited epic fantasy.

For upcoming events, I’m looking forward to ending April as a guest at RavenCon in Williamsburg, VA.

Wishing everyone the best! Please think about me this Tuesday as the Great Dragon of the North, Volthraxus, makes his literary debut!

Posted on April 3, 2016, in Uncategorized. Bookmark the permalink. Leave a comment.